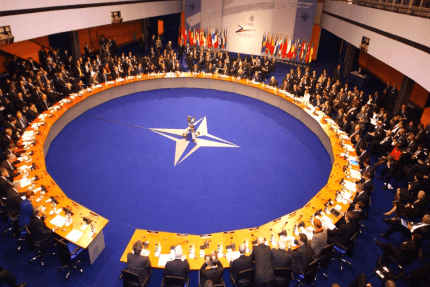 NATO was born in crisis and has endured through sixty years of controversy and calamity. From that day in Washington in 1949,when the founding states signed the organization into existence, and in every decade since, some of the greatest statesmen of the times have predicted NATO's demise.

Through forty years of the Cold War,NATO was rocked by disagreements over Suez and Hungary, France's withdrawal from the Alliance's integrated military command, détente with Moscow, the Soviet invasion of Czechoslovakia, Poland's effort to throw off the yoke of communism, nuclear policy, Intermediate-Range Nuclear Forces in Europe,energy dependency,the reunification of Germany, the Balkans, and combating terrorism. With the end of the Cold War,some argued NATO no longer had a purpose.For a brief moment after 9/11,the Alliance stood united as never before. Barely a year later many wondered whether the organization would survive the pitched verbal battles fought among its members in the North Atlantic Council chamber in Brussels, in the corridors of the United Nations in New York and in the capitals of states undecided over the invasion of Iraq.

Why NATO has endured is one thing. Why it should continue to do so and how it needs to adapt to meet the challenges of the 21st century is the subject of this paper.

Periodically in its history, after bruising encounters had alarmed Alliance leaders over the future viability of the organization, NATO has paused to take stock. The first two of these reviews are still reckoned to have been the best: the 1956 Report of the Committee of Three on NonMilitary Cooperation in NATO and the 1967 Harmel Report on The Future Tasks of the Alliance. With the demise of the Soviet Union, NATO sought to articulate its future purpose and direction in the Strategic Concept of 1991, in a further Strategic Concept in 1999, in the Comprehensive Political Guidance of 2006, and in the Declaration on Alliance Security of 2009.These helped to better focus NATO's efforts, restructure the organization, streamline command arrangements and generally improve the Alliance's responsiveness to the evolving security environment, but did not dispose of some of the more persistent problems related to how NATO conducts its affairs.

In April 2009, at their most recent summit in StrasbourgKehl, NATO heads of state and government tasked the Secretary General to develop a new Strategic Concept to guide the Alliance in the years ahead. Anders Fogh Rasmussen has since appointed a group of twelve experts, representing large and small NATO member-states, the private sector,think tanks and academia,to consider the issue and present its findings in the spring of 2010.The group is chaired by Madeleine Albright, former US Secretary of State, and includes Marie Gervais-Vidricaire, former Permanent Representative of Canada to the International Organizations at Vienna and Canadian Ambassador to Austria. The work of the Group of E x p e rts, i n c l udi n g t h e ir con c l u sion s a nd recommendations, will help inform a report the Secretary General will prepare for Allies' consideration. The draft Strategic Concept will then be negotiated over the summer for agreement at a NATO Summit expected to be held in Portugal in November 2010.

The paper that follows is offered as a contribution to NATO's current deliberations on the future of the Alliance.It is the product of collaboration among military and civilian members of the Conference of Defence Associations Institute in Ottawa and the Canadian Defence and Foreign Affairs Institute in Calgary: military, diplomats and academics working together.

The paper is not intended to be a comprehensive review of NATO's past or current record. Their purpose,rather,is to offer an appreciation of the current obstacles to NATO's fulfilment of its mission “to safeguard the freedom, common heritage and civilization” of memberstates, and to outline what they believe to be the most important avenues of inquiry in developing a new NATO Strategic Concept. The paper is driven by a desire to see the Alliance continue to deliver effective collective defence and security for its members and to contribute to international peace and security. It is informed by Canada's experience as a longstanding member of the Alliance, extensive engagement in international stability operations, and active contribution to the International Security Assistance Force in Afghanistan.